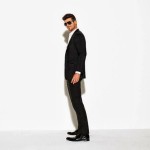 Despite Bentley having minor jaw surgery last week (no, the procedure wasn’t successful – he’s still talking…) it hasn’t stopped the rest of the world wanting a slice of his musical finesse. Currently at the front of the queue is Robin Thicke who wants a revamp of his global smash “Blurred Lines” in time for the holidays. A new official remix has been commissioned to fill a gap in the existing line-up of remixes that only Bentley’s enormous, main club, tight productions can offer.

“By now everyone’s heard it a thousand times,” explains Ben. “So I’m going to take it a little further away from it roots and reinterpret it into a fresh, new, vocal mix that people can rediscover.”

The Phunkstar remix of “Blurred Lines” will be released to club and radio promo next month, and is the latest in a string of remixes Bentley has recently produced for Miley Cyrus, Britney Spears, Lady Gaga and more. In the meantime, Bentley’s new video for his song “What Now…?” is being released this Friday on YouTube, taken from his latest EP “The Place Where Dreaming Ends” out now.