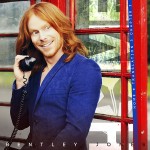 TRANS//LATION 3 is finally here, the highly anticipated sequel covers album from Bentley. The 3rd sequel album kicks off on the artist’s 30th birthday – the 6th anniversary of his first TRANS//LATION album – and will be released in 3 main chapters, each one with its own individual theme reflecting on a specific part of Bentley’s career. “Home (Chapter I)” is a collection of English Western songs hand picked by Ben and transformed by his unique and ground breaking arrangements and productions.