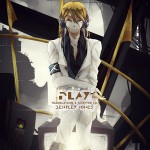 The third and final instalment of Ben’s epic covers project “TRANS//LATION 3” has been revealed. In a 20 sec video clip released on social media Ben reveals what sounds like the theme from Kingdom Hearts 2 “Sanctuary” followed by the artwork for the EP which is simply titled “Play”.

The cover was created by Malaysian artist “Ieka” who has followed Bentley’s work for many years. Impressed by her skills and style, Ben approached Ieka directly and requested her to design the artwork for “Play”.

The next track confirmed for “Play” is seemingly the holy grail of unreleased Bentley tracks. Fans have been searching vigorously the fabled theme from a TEKKEN arcade title that Ben recorded in 2013. Released exclusively in Japan, “Your Sunrise” was originally a collaboration with Bandai-Namco Sound Team member Taku Inoue. Now an exclusive new version arranged by Bentley will feature on the 3rd instalment of the TRANS//LATION 3 project.

“Play” is scheduled for international release on 30th May. Previous instalments “Home (Chapter I)” and “Inspire (Chapter II)” are available now, and “TRANS//LATION 3: The Complete Anthology” is available for pre-order along with the official T3 T-Shirt.