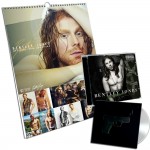 It’s been a busy weekend, but it’s only just beginning as pre-orders for Bentley’s forthcoming “The Rebellion” album go live, along with “The Rebellion: Reloaded” 2 x CD collection which features an exclusive EP.

In addition, fans of Bentley’s fine form can finally begin salivating over his Official 2016 Calendar which can also be reserved right now.

To celebrate all of this Ben has decided to release the official music video for the album track “Delectable Sin”. The song was composed in collaboration with The Shakespeare Institute in Stratford-Upon-Avon and was the main theme for their reinvented production of “Othello”. Expect anguish, rage, deception, blackmail and even *gasp!* murder!!